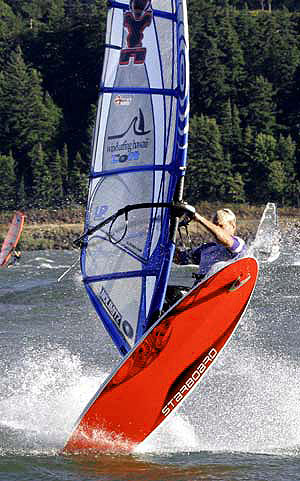 I call this group of maneuvers the Legacy group although often you will see the words Classic or Old School being used as well. This is a subjective classification for sure and I guess all windsurf moves eventually become Classic or Old School over time and anything relatively new will be known as New School. Interesting enough, like fashion, anything old enough and not seen in public long enough will eventually become in vogue again and cool, jettisoning the Old School reputation.

This set of maneuvers are more or less exercises or studies that demonstrate windsurfing skills and some are very helpful (if not necessary) in learning other maneuvers. For Example,  Backwind Sailing  is a very helpful skill that is used in many tricks so I suggest mastering it on both tacks.    Fin First Sailing  might be helpful in Willie Skippers, I am not sure, but if the wind is light, you are at the beach, and your friends lean toward the lazy side of life then you can entertain them with this skill as well as sailing Inside the Booms.

Three maneuvers define this group: The Body Drag, The Cowboy, and the Sail Throw.   In addition to the Standard Body Drag there is the  One Handed, no handed, and the Clew Forward variations.  The Sail Throw also has the Stall Tack, Bob, and Boomerang variations. A Willie-Skipper is a move performed by jumping the board out of the water and spinning it 180 degrees while in mid-air and landing with your feet out of the footstraps, on the deck, and the board sliding backwards. Once the board has landed and is sliding then the sailor can perform a  Standard-Willie-Skipper  (flip the sail, let the board stop, and begin to windsurf away in the other direction) or another variation.